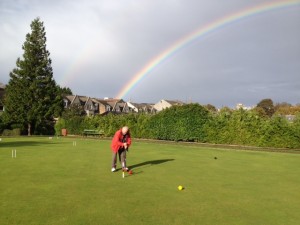 Whilst work has started on the lawn at Albury, and it is looking greener than all season, play is still possible on days when the weather is fine and temperature reasonable. Brian and Robert had a stimulating game and the photo shows Robert using his new grip. Whilst he was looking for a halo for his efforts all that could be managed was a rainbow but it was good enough for him to win!

The first Crathes Croquet Finals involving eight Club players was held at ALBURY on 28/29 September 2013, a cold but dry weekend.

Results of the semi-finals played on the Saturday were:

It was good to see Gordon, John, Vaila and Mary playing in their first Competition of this type.

The lead changed in both games and special praise should be given to Alex who, despite being unwell, put up a great fight, giving Brian a real game. 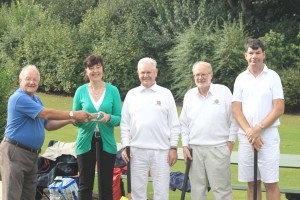 The Finals were played on Sunday with the following results:

Vaila Will and Charles Henderson beat Brian Clark and Gordon Hendry, 9-7 after a ding-dong battle which ran into “extra” time. Vaila was delighted with the result, declaring “this is the first time I’ve won any sports competition!” 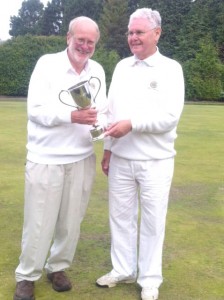 Brian Clark beat Charles Henderson 26-16. Brian got off to a great start and led all the way. Being the only player to win all his matches in both the leagues and the Finals Weekend, Brian deserved to be the first holder of the Burnett Cup.

All matches were played in a competitive and friendly manner.

After a gap of a year we resumed playing against Fife Croquet Club on Thursday 12th September 2013, with an 11-3 win at Hill of Tarvit. We were delighted to see that the lawns were much improved since we last played there in 2010, although it is fair to say that they are some way off the standard of Crathes and Albury. We were made very welcome by our friends at Fife CC and thank them for making the arrangements, especially Steve Spackman. It was also nice to see Andrew Harvey again as he was our original contact with Fife CC (and before that Kinross CC) when these matches started. 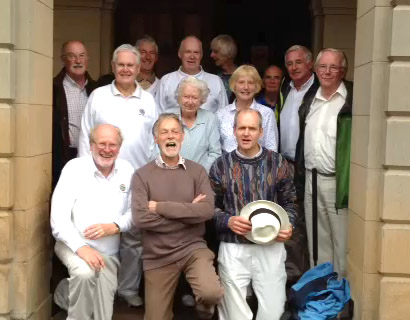 Players sheltering from the rain after the match – pay attention at the back, Mike!

We had sunny weather from 11 am until after 3pm when it grew a bit colder. The heavens opened just after 4 pm and we abandoned play and went back to the National Trust Cafe at Hill of Tarvit Mansion House for a well earned cup of tea.

Well done to Bill and Malcolm (who was playing in his first match). Both had 3 wins out of 3. As at Edinburgh all players had wins.

Round 1
SINGLESSimon beat Mike 10-2
Brian beat Andrew 15-4
Bill beat Jean 12-3
DOUBLES
Dan and Allan beat Steve and Ishbel 5-4
Charles and Malcolm beat John and Alison 6-3
Round 2
DOUBLES
Brian and Bill beat Mike and Alan 17-6
(Brian did 9 hoops in one turn, on a very difficult lawn)
Dan and Allan lost to Tom and Jean 7-6

SINGLES
Simon beat Andrew 9-3
Charles beat Ishbel 9-6
Malcolm beat Alison 10-6
Round 3
Matches were curtailed by heavy rain,. These were the agreed scores at abandonment
DOUBLES
Charles and Brian drew with Mike and Tom 8-8
Simon and Dan lost to Alan and Ishbel
13-10
Bill and Malcolm beat Jean and Alison 9-5
SINGLES
Allan drew with John 6-6
We have invited Fife CC to Crathes or Albury next year.

Congratulations to Bill Strachan on winning the SCA 20+ Tournament played at the Meadows Club, Edinburgh on 7 September. A report with full results, supplied by the tournament manager Hamish Duguid, can be found on the SCA website.

Two CCC members, Brian Clark and Simon Robins, participated in the Scottish Short Croquet Championship held on Sunday 25th August at the Green Hotel in Kinross. An excellent report of the proceedings together with the full results has been prepared by Fergus McInnes and this can be viewed on the SCA website. Congratulations to the winner, Roger Binks, but commiserations to Brian who, having won all of his first four games, was in with a chance of winning the Championship right up to the last match and, as Fergus reports, had possibilities of finnishing in that game too. 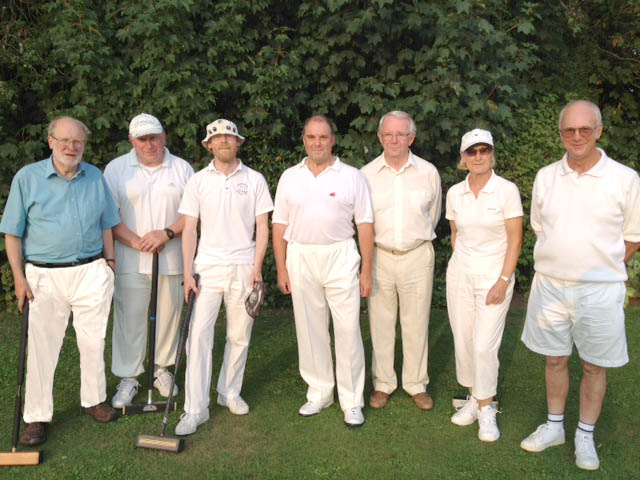 Players at Kinross (from the left), Brian Clark, Alistair Malcolm, Fergus McInnes (holding the trophy which he is about to present to the winner . .) Roger Binks, Simon Robins, Janice Duguid and Hamish Duguid. Joe Lennon (not in the picture) was the eighth player

Overall, this was a very enjoyable day of croquet, assisted by the excellent weather and a fine lunch. Our thanks to all those involved in the organisation which could not have been better.

On behalf of the Scottish Croquet Association (SCA), Crathes Croquet Club (CCC) organised an new National Croquet Weekend on 20/21 July, the first since our Club was formed in 2012. The format was Doubles on the Saturday and Singles on the Sunday, and both Crathes Castle and Albury Sports Centre Lawns were used. In addition to CCC members there were players from Edinburgh, Penrith, and Keswick. In all 16 took part and the “croquet side” was arranged by Fergus McInnes of SCA and Brian Clark of CCC. 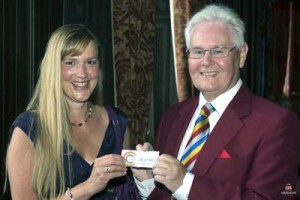 Having had previous concerns at not receiving her CCC membership card, Jocelyn Young is pleased have Charles present it in the grand surroundings of Aberdeen Town House

The SCA Report and Results are recorded on the SCA website so suffice to report that the Doubles Winners were Ian Hall and Tom Ryan from Keswick, and, despite being troubled by a bad back, Bob Burnett won the Singles so a CCC player’s name will be the first on the Singles Trophy.

We were entertained by Aberdeen City Council at a Civic Reception in the Town House on 20st July. The host was Councillor Len Ironside who was fullsome in his praise of our efforts to promote Croquet in the area. We thank Aberdeen City Council, Sport Aberdeen, Albury Sports Centre, National Trust for Scotland, SCA and Nexen for supporting the Event. Also thanks to Alex Burns for arranging sponsorship of the two Quaichs which were presented to the Winners.

Those taking part in the Competitions were joined by other CCC players, and guests …..36 in all…and enjoyed Supper at Royal Northern & University Club, Aberdeen.

We have received lots of favourable feedback and are already working on the 2014 Competitions. Further information on that will be issued after our Committee Meeting later in August.

Crathes CC enjoyed a great days croquet, in glorious weather, at Lauriston Castle, Edinburgh on 31 July against Edinburgh CC, the day culminating with a victory for Crathes by 16.5 to 13.5.

Lauriston Castle provides a great setting for croquet, with the Castle behind and the three lawns looking over the Firth of Forth.

For the eight players in the CCC team, Robert Bell, Allan Bruce, Alex Burns, Brian Clark, Charles Henderson, Elaine Mather, Simon Robins and Bill Strachan, the most pleasing aspect was that all 8 recorded at least one win. Well done to all.

Everyone played 4 games and the results were :

Charles 4 wins, never before and probably never again!
Allan 3, including a 14-0
Alex 2.5 despite fitness problems
Robert 2 steady as always
Simon 2, including a 14-4
Brian 1.5 someday he will avoid Fergus in the draw!
Elaine 1 Bob’s coaching paying dividends
Bill 1 a good debut

Many thanks to Allan Hawke of Edinburgh CC who organised the day which ran smoothly in a friendly, but competitive atmosphere. Thanks also to Brian C for making the arrangements at this end.

One of the Edinburgh players was Ian Wright, aged 89, still playing with a handicap of 12, having been on a minus handicap in his prime. He was Scotland Croquet Captain for 8 years and told some of us that he was taught to play croquet by his aunt at the age of 6. Ian reminisced about visits to the North East. He knew that croquet was played in Cuminestown, New Deer and Maud (of course!) . Captain, Charles Henderson, remembers that when growing up in Maud that there were about 6 houses which had croquet lawns (or greens as they were called) and his father played on Saturday evenings. Ian Wright is a delightful young man with some interesting croquet stories.

Crathes C C will host 2 Competitions at Albury Sports Centre and Crathes Castle Croquet Lawn on 20 and 21 July. Sixteen players will take part, coming from Somerset, Lake District, and Edinburgh as well as the North East of Scotland. Play starts at 10.30 am and is scheduled to end at around 6pm each day.  The Doubles Competition will take place on the Saturday and the Singles the following day.

Sport Aberdeen and Aberdeen City Council were delighted that the Golden Games…the only such event in Scotland…..went so well with 350 over 65s taking part in various sports and activities. Croquet featured for the first time and was considered a success, with a number of participants expressing interest in having another session, probably leading to taking up the game.

If you would like to buy a white CCC sweater, with logo, of the type already worn by quite a few of our players, you can do this in two ways :
1. Contacting Gordon Hastie of Bowling Direct, Dundee on 01382 527087 reminding him that we bought a supply in 2012 so he can check type etc. Then having the sweater embroidered by Zippa, in Torry. Tel 01224 874877. They hold a computerised logo for us.
OR
2. Contacting Charles Henderson on 01224 313555 and he will arrange a “bulk” purchase, including logo for those who want a sweater.

Last year we paid around £28 including logo, buying on a group basis. 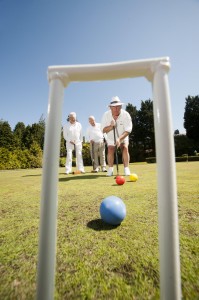 Aberdeen’s FREE Sports and Activities Festival for over 65s is back! As part of this year’s event, Crathes Croquet Club are hosting a croquet session at Albury Sports Centre on Wednesday 12th June at 1000 am. Beginners or anyone wanting to learn more about the game are welcome and Club members will be on hand to give advice and tuition. 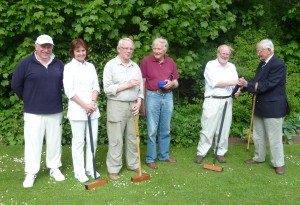 Three players from Crathes Croquet Club took part in the Kinross 11+, a tournament for players with handicaps of 11 or more. Held on the full-size lawn at the Green Hotel, Kinross on Monday 3rd June, the tournament was blessed with fine weather.  The competition was won by CCC member, Brian Clark who is shown receiving a bottle-shaped prize from Club Secretary, Brian Smith. Also pictured (left to right) are Alistair Malcolm, Elaine Mather (CCC), Simon Robins (CCC) and Andrew Harvey. Thanks to the Kinross Club for organising a very enjoyable event and to Hamish Duguid, our SCA referee.

The Burnett Cup presented to Club 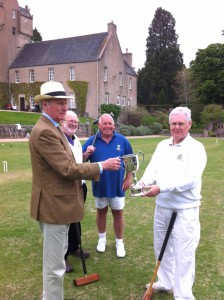 Presentation by James Burnett of Leys of a trophy to be awarded to the winner of the Club singles competition. The magnificent cup was received by Club Captain Charles Henderson with Bob Burnett (second from right) and Brian Clark in attendance. The ceremony took place at Crathes on Sunday 26th May, an event which was the culmination of four days of expert coaching at all levels by Bob Burnett. The Club is most grateful to Bob for his continued support and to the Burnett Clan for the Club’s first trophy which will no doubt be keenly contested.

Open Days at Albury Sports Centre on 28th April and at Crathes on 5th May were both blessed with good weather and were enjoyed enormously by all who took part. The montage below gives a flavour of activities at the Crathes event, as seen through the lens of Margaret Walker’s camera. 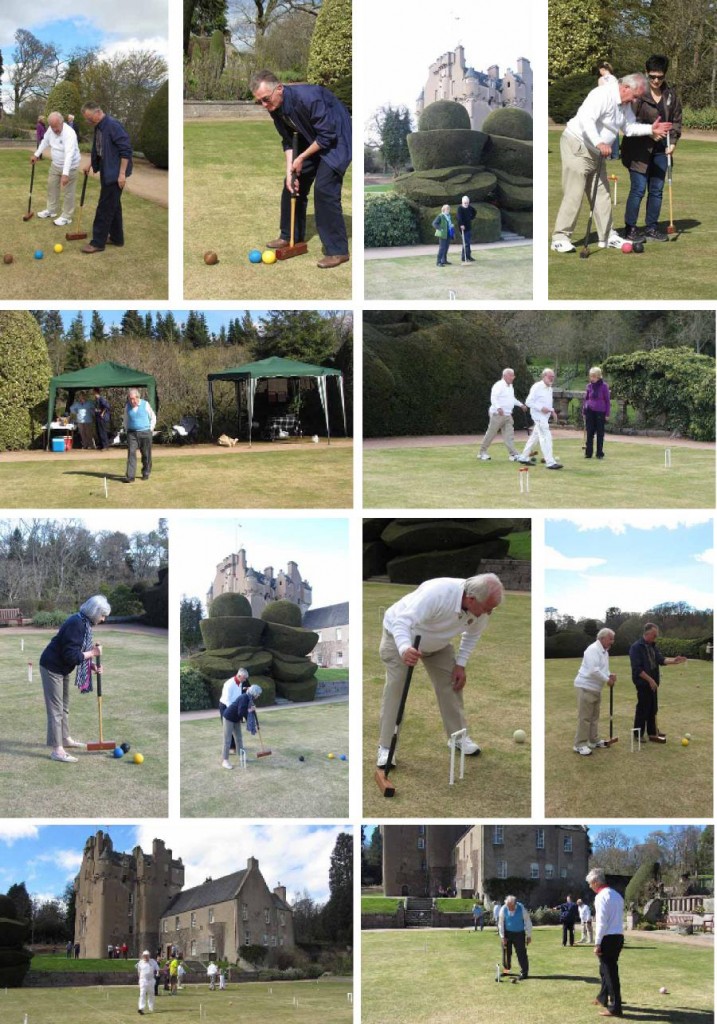