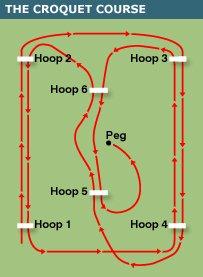 Croquet is a sport which relies on strategy not strength: it can be played on equal terms by male and female alike and by people of any age. Croquet is played on grass lawns, usually a former bowling green, on which there are 6 hoops and a central peg. The game is played by two teams which can be singles or doubles, and each team has 2 balls. The aim of the game is for one team to hit their balls through all the hoops in the correct order and then hit the peg, before the opposing team.

The game of croquet is governed by the Croquet Association, which recognizes two principle forms of the game: Association Croquet and Golf Croquet. Both of these are played at Aberdeen and Crathes Croquet Club.

Association Croquet involves getting extra turns in reward for hitting another ball or running a hoop. This provides for a richness of tactics and a wide variety of types of shot to play. Good players can make ‘breaks’ as in snooker, sometimes hitting a ball through (‘running’) many hoops in one turn.

Golf Croquet is a simpler form of the game, but still involves a great deal of skill. It is perhaps particularly suitable for when you have limited time, as games tend to be shorter and (if you haven’t played before) the tactics and rules are a bit more straightforward to understand.

A more comprehensive introduction to Association Croquet by Dr Ian Plummer can be viewed with this link to the Oxford Croquet website.