If you have items to include for the News Page please contact the, Secretary, Club Captain or webmaster.

Saturday
Round 1 Started with the 4 home players against each other Bill S beat Brian C 18-6, Robert B with a surprising easy win against John O 18-4. Roger S beat David H 18-14.
Round 2 Was interrupted by a heavy rain shower. It did little to deter Bill S who took a break from hoop 1 to peg but the lawn was then declared unplayable. David H and Brian C also abandoned their game. John H and Robert B played through the rain with John H narrowly winning 16-15. After 40 minutes and some water clearing by John O and Bill play resumed. Bill continued playing well and won 18-2. David H beat Brian C 18-12.
Round 3 John O beat John H 18-1, David H beat Bill S 18-7 and Brian C beat Roger S 18-2
Round 4 Brian C beat John H 18-10. A meal had been booked for early evening, so the Tournament Manager decided play would stop at 6pm, with any unfinished matches pegged down. John O v Bill S and David H v Robert B were pegged down with about 1hr remaining. These matches would be completed after the Sunday rounds should they impact on the final results.

Sunday
Round 5 John O against David H a crucial match. David H occupied the lawn for the first 45 minutes but John O hit in and took one ball from hoop 3 to peg and cross wired David H on 3-back.. David H eventually hit in and took the lead by 1 hoop but bobbled rover and with time running out took 3 minutes to decide his next shot. John O ran an angled 3-back hoop then making one more hoop sent his ball to the corner 1. David H fail to hit in and John O won 14-13. Robert B beat Bill S 18-12 and John H beat Roger S 18-12.
Round 6 David H beat John H 14-7, Brian C beat Robert B 17-12 and a remarkable game between John O and Roger S. Roger hit in on turn 3 and set off on a 3 ball break but bobbled 2-back, using his half bisque to prevent John O an easy roquet. John O hit in on turn 4 resulting in a boundary cannon which failed. Roger missed the roquet. John O then hit in and took his ball to peg, his leave almost cross-wired Roger on 3-back. Roger narrowly miss the roquet allowing John O to go round and peg out to win 18-7 on turn 8.
Round 7 John O beat Brian C 18-4, John H beat Bill S 18-12 and Robert B beat Roger S 18-12.
John O with 4 wins and David H with 3 wins the pegged down games would decide the winner. David rearranged his return bus but although he beat Robert B 18-8, John O beat Bill S 18-9 to win the Aberdeen Quaich, the first ACCC player to win the trophy.
John Owen 5 wins : gross hoops 90. runner-up David Houston 4 wins : gross hoops 95

Full results should be on the SCA website in the near future. 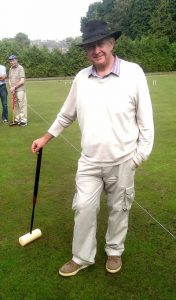 On the Saturday morning of our recent AC Tournament, we heard the sad news that David Colling had died after a short illness.

David was a regular GC player at Albury, although he had a brief encounter with AC playing Alternate Stroke Doubles with myself. I will always remember that David would question my limited knowledge of GC rules. He could always back up his enquiry as he had the rules loaded on his mobile phone. His sense of humour will be sadly missed.

Our thoughts are with Zosia and her family at this sad time. 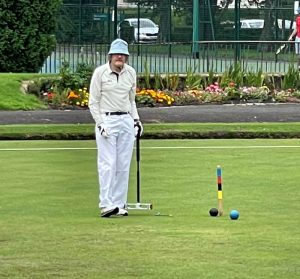 John Owen (2) and Bill Strachan (8) ACCC and Brian Durward (4.5) and Stefan Colling (7) Glasgow were the only other pairing to enter. So a Davis Cup format was agreed ie 2 singles, 1 doubles (Alternate Stroke) and 2 reverse singles. All matches were 26pt, Advanced Rules and 3hr duration, and were played in Glasgow. Thanks to John winning both his singles and assisted by Bill winning the crucial doubles ACCC won the trophy 3-2. This was the third time Bill has won the Spalding Trophy.
Thanks to Glasgow for providing pizza lunch and cold beers (non alcoholic) and Eleanor Spalding for presenting the trophy.

Full report by John Owen on the SCA website 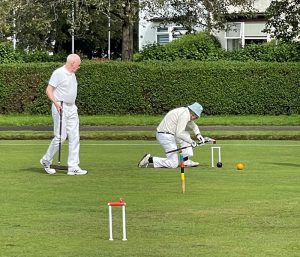 John playing a hampered shot on way to winning doubles 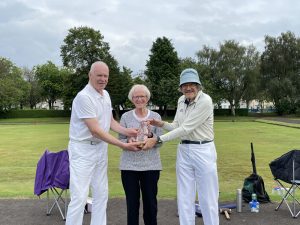 Round 1 RSR beat JL 26/18 : CW beat BC 26/23 : RB beat RF 26/16 Round 2 CW beat JO 26/0 : JL had to withdraw due to physical difficulties. RB v RSR match was pegged down and matches rearranged. Round 3 CW beat RSR 26/11 : RB beat BC 26/21 : JO beat RF 26/8 Round 4 RSR beat RF 26/11 : RB beat JO 26/12 BC then withdrew protecting an existing injury.
At the close of play only 5 players remained and the position as follows RB 3/3, CW 2/2, JO 1/3 : RSR 1/3
Handicap reductions CW to 6 and RB to 7
Round 5 JO beat RSR 26/7 : RB against CW had just started when CW suffered an unpleasant bout of nausea. Unfortunately he could not continue and players now reduced to 4. Taking advise it was decided that all matches involving withdrawals be declared null and void. The position was now RB 2/2 : JO 2/3 : RSR 1/2.
The pegged down game would now provide the winner. RB was ahead 6/1 but with no bisques left, RSR on paper was the favorite. RB proved that wrong with some consistent play and eventually pegging out to not only win the match (26/1) but also the Summer Weekend Trophy.

There were teams from Aberdeen, Auchincruive, Balgreen and Glasgow for this annual tournament, held at Knightswood in Glasgow. It was cool and cloudy at first, but it soon warmed up and we had some lovely sunshine for much of the day. One lawn was rough in places, but the other one was fine and fast-paced. Because of time constraints, matches lasted 2.5 hours and were 22-point affairs, a version which was new to a number of people, but which worked fine.

John and Bill played their first game against Roger Binks and Calum Worsley, representing Balgreen, who had 1.5 bisques. Both John and Calum got their balls to rover, while Bill and Roger made smaller breaks. Unfortunately, Bill missed a short roquet in corner 2, allowing Roger and Calum to get back in and go on to win 16-15 in a tense finish as time ran out. 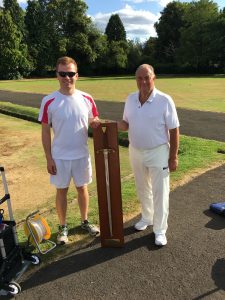 The second game was on the rougher lawn against Kevin and Michelle Wright of Auchincruive, who had the luxury of 6.5 bisques. John got as far as hoop 6 on one break but blobbed the hoop as his ball started moving during his swing (that’s his excuse, anyway). The game became quite slow, with no-one making a big break, but Kevin and Michelle used their bisques to get 2 points ahead when time was called. John had to hit in with the last turn, which he did, then made the 3 hoops under pressure to win 12-11.

In the last game, the opponents were Glasgow’s Brian Durward and Stefan Colling, who had just a half-bisque. John had one break, getting through 2-back but missing the return roquet. Bill then had a superb break, all the way from the starting hoop (hoop 3) to rover. Brian and Stefan looked like making a comeback and had got both balls to 2-back before breaking down. John then set up a break with Bill’s ball near rover, ready to be peeled through, but he blobbed 4-back. The opponents missed and Bill’s ball was still sitting in front of rover, so he went through himself, and John soon followed with a break to the peg, but couldn’t finish as Bill’s ball was stuck on a boundary. Bill then pegged out his ball and Brian left one double-target too many, which John hit and went on to peg out for a 22-10 win.

The Balgreen team were worthy winners of the Wilkinson Sword, winning all their games, with Aberdeen finishing second and Glasgow third. Thanks to Brian Durward for managing the event and Stefan opening the “bar” for some cold and refreshing non-alcoholic beers mid-way through the afternoon. 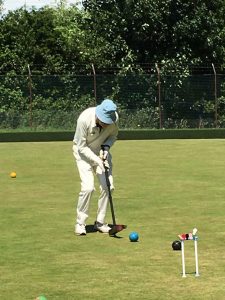 Congratulations to John Owen on winning the Tournament played at Balgreen over the weekend, remaining unbeaten over the two days.
Format : Advanced Level Play : 26pt : 3hr duration : Cross block play, winners of blocks in Final : Block A 5 players : Block B 4 players.
Block B Saturday saw John win all 3 matches beating Kevin Wright 20/3, Roger Binks 26/12 and Calum Worsley 26/14. In contrast Bill lost all 3 of his matches Rosemary Sanders-Robertson 19/20, Kevin Wright 11/12 and George Plant 14/26.
Block B Sunday John resumed his winning ways beating Rosemary Sanders-Robertson 26/13 and George Plant 26/7 to clearly qualify for the Final. Bill continued to struggle and lost to Roger Binks 10/12 and Calum Worsley 15/17, not a weekend to remember but great to be playing tournament croquet. 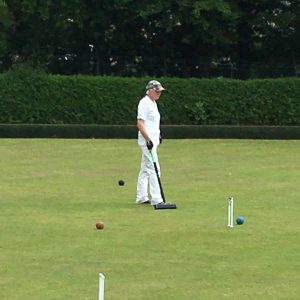 Block A The winner was still in doubt until the final rounds on Sunday, with Alan Wilson beating George Plant 21/19 but then losing to Rosemary Sanders-Robertson 26/11. This result saw Rosemary qualify for the Final.
The final was a rematch of an earlier block game but the result was still in favor of John winning 26/16. John’s performance over the weekend was impressive considering the fast pace of the lawns combined with challenging hoop settings. His new mallet should be arriving soon, it has a lot to live up to.
Thanks to Alan Wilson as both Tournament Manager and Referee. 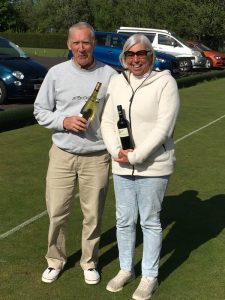 Last minute Covid-19 restrictions in and out of Glasgow, meant the manager was forced to make some late changes to the entries. Resulting in 5 couples contesting the event, Alan Wilson & Rosemary S Robertson (6.5) Graham Brightwell & Bill Strachan (9) Jane Morrison & Joe Lennon (9.5) John Owen & Roger Binks (11) Kevin & Michele Wright (33). Format Swiss pre-drawn, Handicap, 14pt games, 90mins duration.
Kevin and Michele with at least 7 bisques per match comfortably won their 3 matches, although Graham and Bill could have won provided, they won their final game against John and Roger but failed to do so.

The weather forecast predicted some rain but it never appeared and conditions were really pleasant throughout the day. Thanks to Campbell as event manager and congratulations to Kevin and Michele on their win. Full Results on Croquetscores.com 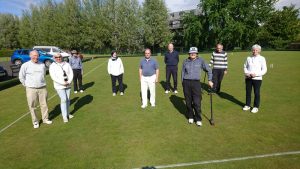