Dates for Your Diary

Thanks for support to: 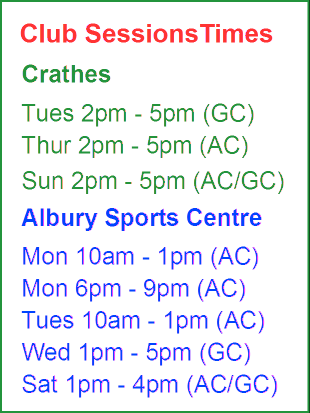 The recent improvement in the weather is allowing play to resume at Albury. Bill and John had a game on 17th February and the court was surprisingly soft.

Under the Level 4 Covid 19 Regulations  – Albury is available for Play, using the Foxy Hoops. ONLY 2 PLAYERS allowed at each session.

Only residents in Aberdeen City can play at Albury for the time being. Please book on the Calendar as usual and state what time you are playing. Play is not permitted if the ground is FROSTY.

Play at Crathes will resume in the Spring

A difficult Season has now drawn to a close. We hope that the 2021 season will see a return to Croquet as we know it.

Towards the end of last Season, some Competitive Association Croquet  was played in Edinburgh with 3 of our members taking part.

The Hamish Duguid Handicap Weekend  – Bill Strachan, John Owen and Stefan Collin entered from our Club. Stefan was the Winner with John the Runner up.

The following weekend John and Stefan took part in the Malmet Trophy. John was once again Runner up.

Congratulations to all our players in what has been a very short competitive season.

Aberdeen and Crathes Croquet Club, originally called Crathes Croquet Club when it joined the Scottish Croquet Association (SCA) in 2014, is dedicated to promoting BOTH Association and Golf Croquet. We play on the picturesque lawn at Crathes Castle, Banchory, courtesy of the National Trust for Scotland, and at the Albury Outdoor Sports Centre, Ferryhill, Aberdeen, courtesy of Sport Aberdeen and Albury Outdoor Sports Centre. Thanks to both for their continuing support in 2021.

Club membership stands at 32 men and women of all ages. Our Club Coach, Bill Strachan assisted by John Owen, can offer a coaching programme to cater for both the competitive and social player.

ACCC is strongly committed to the development of both Association and Golf Croquet in the North East of Scotland.

New Members are always welcome. Croquet offers an interesting and fun outdoor activity from March to October. It is a game of skill and strategy, angles, tactics and guile. The handicap system allows people to play successfully at all levels. Want to have  a taster session? Contact Bill at bill.strachan46@gmail.com

Croquet is played in 28 countries around the world. The Association Croquet World Championship was held in Victoria, Australia in February.  The 2020 Champion is Reg Bamford from South Africa. This is his 5th world title, having first won in 2001.